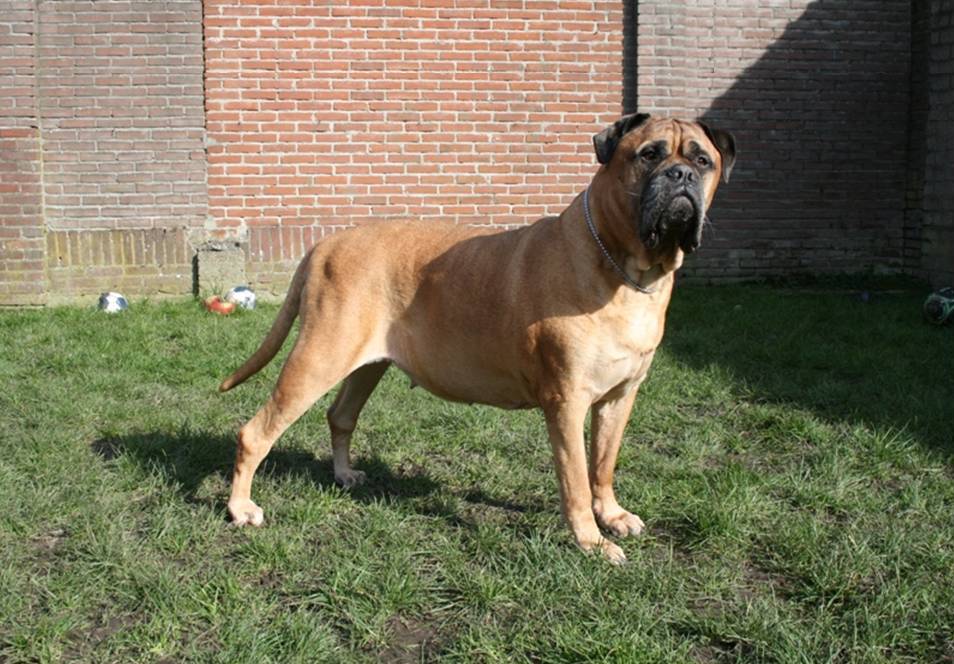 Pam was born on April 13, 2006. She is a daughter from Diva’s first litter. Her father is Mexx van de Bullmahoven. Pam had a good health till the end.

Pam had a cheerful but easy character and you could trust this dog. She liked attention and therefor loves to hug. When we had visitors she liked to sit with them and if you dare to stop fondle she friendly let you know that that wasn't an option. Also walking was one of her favorite hobbies and it coudln’t be far enough. Besides some little moments playing with toys wasn't her thing but she almost never refused running after a stick.

In January 2008 she had her first litter (8 puppies), her second litter she has had in February 2009 (11 puppies) and her third litter in February 2010 (7 puppies). With high exception we decided, because of the healthresults, good characters, beautiful dogs she brought us and the fact she was in very good shape, to let her have a fourth litter. This brought us also 9 gorgious puppies. Pam was an excellent mother, took good care of her puppies and liked to play with them. She was also very social to the puppies of the other dogs. When she was a bit older we notice that her interess in other puppy's was a bit less, but she still was very sweet for them but she prefered her rest.

In 2014 and 2015 we entered Pam for some shows in the Netherlands. She enjoyed doing it and she runned very cheerful and constantly wagging through the ring. Besides that she did a very great job, she became Benelux Veteran Winster 2014, Veteran Winster 2014 and Dutch Veteran Champion!!

In February 2016 we discovered she had lymphoma, early staged and with a small dose of medication she was just her happy self again. On mondaymorning March 7th, 2016 she had an internal bleeding and suddenly left us, in just minutes. Minutes we could and have hold her, kissed her, thank her and be with her. Still it feels it’s not enough, it wasn’t time to say goodbye. But…maybe it’s never enough, it’s never time to say goodbye, it’s always too early when they leave. Thank you sweet Pambo for just beeing here, only that was already enough and you gave us so much more.